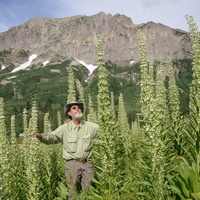 The effects of climate change on the Colorado Rocky Mountains include a trend toward lower winter precipitation, more rainfall, earlier spring snowmelt,  more frequent frost effects on flowering, and a longer growing season. We have recorded changes in the abundance and phenology of wildflowers since 1973, looked for correlations with the changing environment, and investigated the the consequences of these changes for species dependent on flowers, such as pollinating bees and hummingbirds. We have also made long-term observations of plant demography and flowering, providing evidence for decadal-long cycles in flowering, and elucidating the environmental triggers for a mast-flowering species of gentian that flowers once and dies after decades of vegetative growth. A career-long commitment to working at a single field site, the Rocky Mountain Biological Laboratory, has facilitated these long-term studies, generated large data sets that are now being used by many researchers, and provided insights that could not be obtained in other ways.

(photo: David Inouye stands next to flowering plants of Frasera speciosa, which he started from seeds planted in 1982; they flower once and then die.)