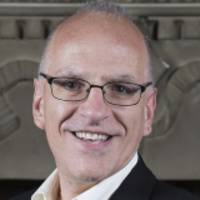 Abstract
Future strategies for energy production will undoubtedly require processes and materials that can efficiently convert sustainable resources into fuels and chemicals. While nature’s enzymes elegantly integrate highly active centers together with adaptive nanoscale environments in order to exquisitely control the catalytic transformation involved in such processes, they are difficult to incorporate at an industrial scale and limited in terms of their stability. The design of more robust heterogeneous catalytic materials that can mimic catalytic behavior of enzymes, however, has been hindered by our limited understanding of how such transformations proceed over inorganic materials. The tremendous advances in ab initio theoretical methods, molecular simulations and high performance computing that have occurred over the past two decades provide unprecedented ability to track these molecular transformations and how they proceed at specific sites and within particular environments. This information together with the unique abilities to follow such transformations spectroscopically is enabling the design of unique atomic surface ensembles and nanoscale reaction environment that can efficiently catalyze specific molecular transformations. We present recent advances in computational catalysis and their application to engineering molecular transformations for energy conversion and chemical synthesis.

We discuss the sites and nanoscale reaction environments necessary to carry out specific bond-making and breaking reactions as well as proton and electron transfer processes important in the catalytic reduction and oxidation processes that control the catalytic conversion of biomass to chemicals as well as the electrocatalytic transformations of fuels to energy. More specifically, we discuss the heterogeneous catalytic hydrogenation of oxygenates to value-added chemicals and the electrocatalytic reduction of oxygen and carbon dioxide to water and CO, respectively. We draw direct analogies between the elementary processes that govern these seemingly different systems and explore the design of 3D environments that can control these transformations.

He has made seminal advances to development and application of computational methods toward understanding catalytic and electrocatalytic reaction mechanisms, and the sites and environments that carry out reactions under working conditions. He has received various awards for his research in computational catalysis and molecular reaction engineering including the Robert Burwell Lectureship from the North American Catalysis Society, the R.H. Wilhelm Award in Chemical Reaction Engineering from the American Institute of Chemical Engineers and the Paul H. Emmett Award in Fundamental Catalysis from the North American Catalysis Society. He has co-authored over 250 papers, two patents and two books. He serves on numerous other editorial and advisory boards and served as an editor for the Journal of Catalysis for 10 years.