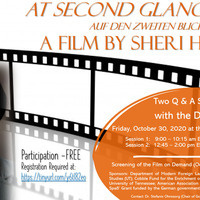 Two Q & A Sessions with Sheri Hagen, Director of "At Second Glance"

The German Studies Program at the University of Tennessee will host two 75 minutes Q & A Sessions with Sheri Hagen, director of "At Second Glance" ("Auf den zweiten Blick") that are scheduled as follows:

Sheri Hagen's film "At Second Glance" ("Auf den zweiten Blick") will be available on demand in German with English subtitles so that you can watch it prior to the Q & A Sessions on Oct. 30,2020. A password protected Vimeo link (along with the password) will be sent via e-mail after registration.

Sheri Hagen was born in Lagos, Nigeria and raised in Hamburg, Germany. She studied at the Stage School of Dance and Drama in Hamburg, as well as the Studio Theater an der Wien in Vienna, Austria. The focus of her acting career is film and television but between 2010 and 2012 she also performed in several stage productions in Berlin, Germany.

Hagen career as an actress began in 1995 and, among others, she played major roles in several episodes of the long-standing, popular German crime series Crime Scene/Tatort and The Old Fox/Der Alte as well as in theatrically-released films, such as The Lives of Others/Das Leben der Anderen (2006) and Branwen Okpako’s The Curse of Medea (2014).

Hagen launched her career as a screen writer and director with Stella and the Stork/Stella und die Störche (2007), a the short film for children; this was followed by her debut feature film At Second Glance/Auf den zweiten Blick (2012) and a short film entitled Simply Different (2015). In 2016, she released Blue Window/Fenster Blau, an adaptation of Sasha Marianna Salzmann’s play Muttermale Fenster Blau. Hagen has scripted all of her films and financed them through her production company, Equality Film.

In her film At Second Glance/Auf den zweiten Blick,  Sheri Hagen is exploring ‘blindness’ in a literal as well as a metaphorical sense. "Set in a snow-covered, unhospitable-looking Berlin, actress Sheri Hagen's directional debut, Auf den zweiten Blick (English: At Second Glance), tells the story of three visually impaired couples as they learn to cope with their visual impairment, accept help from others and face reality. The film initially portrays the loneliness that the visually impaired can experience, but the more the characters open up to human contact and develop relationships with each other, the more the film brightens up: honest and heartwarming without falling back on stereotypes or glossing over the facts." - Hannah Klümper, EXBERLINER

Please make sure to check the e-mail that you use for this registration. You should receive the links within 24 hours of registration.

Contact Dr. Stefanie Ohnesorg, Chair of German Studies, University of Tennessee at ohnesorg@utk.edu if you have any questions.

Both sessions will be facilitated via Zoom and registration is required. Zoom Link will be provided via e-mail after registration.