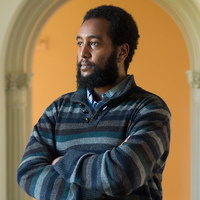 This event has been canceled.

After Rome: Writing History at the End of Empire

Scholars have long claimed that the contraction of the Roman Empire in Europe and the Near East during the early Middle Ages affected historical writing, limiting its scope to local concerns. Professor Yirga’s talk will compare seventh and eighth century historical chronicles from Gaul, Syria, and Egypt, in order to challenge that view. As cultural expressions of their authors—three aristocrats whose wealth and social influence were built to recreate an empire which no longer existed—these works reveal visions of history that accommodated the collapse and reconfiguration of the society in which they lived. Ultimately, in contrast to the assumptions of modern historians, all three chroniclers prove themselves to be deeply interested in the place of themselves and their societies in an international context.

Felege-Selam Solomon Yirga is an assistant professor of history. His research focuses on the reception of Byzantine texts, and in particular, historical writings by Copts, Syrians, and medieval/early modern Ethiopians.

Free and open to the public, but registration is required.

Registration link. Once registered, you will receive a confirmation email with a link to the webinar.