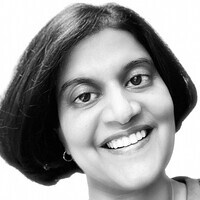 Decades after Virginia Woolf’s death, scholars discovered “Sketch of the Past,” the author’s unknown, unfinished, and unpublished memoir.  When “Sketch of the Past” was published in 1985, critics hailed it as one of Woolf’s most beautiful and important works. However, the only published version of “Sketch” is error-riddled and inauthentic: editors made hundreds of mistakes as they transcribed and combined Woolf’s incomplete drafts. Professor Seshagiri is preparing a new, accurate edition of “Sketch of the Past” for 21st-century readers, and in this conversation, she will describe her adventures in archives, her new discoveries about how Woolf composed her autobiography, and the complex, exhilarating decisions that editors make when they publish unfinished work.

Urmila Seshagiri is associate professor of English literature. The author of Race and the Modernist Imagination (Cornell, 2010), she is the recipient of grants from the NEH, the American Philosophical Society, the New York Public Library, the Paul Mellon Centre for Studies in British Art, and the Harry Ransom Center for the Humanities. Her edition of Virginia Woolf’s “Sketch of the Past” is forthcoming from Cornell University Press. She is editing the Oxford University Press Centenary Edition of Woolf’s Jacob’s Room, and she is completing a book called Still Shocking: Modernist Fiction in the 21st Century.  She serves as the “Out of the Archives” editor for the journal Feminist Modernist Studies.  In 2020, Professor Seshagiri received the James and Nell Cunningham Outstanding Teaching Award, the highest teaching honor in the College of Arts and Sciences.

Registration is required. Once registered, you will receive a confirmation email with a link to the webinar.