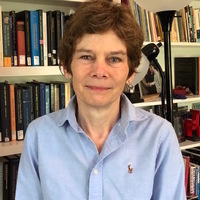 Women and the Dead in the Carolingian World

What important roles did women play in terminal care during the eighth, ninth, and tenth centuries in western Europe? Formal ceremonies marked dying, death, and burial among clerics, monks, nuns, and aristocrats. Yet ordinary Christian funerals happened at home. In her presentation, Professor Chazelle examines how women cared for the dying and the dead within their households in practices apparently sanctioned by ecclesiastical authorities, who regarded death—much like birth—as a traditionally domestic family matter.

Celia Chazelle is professor of medieval history at The College of New Jersey. She is the author of The Crucified God in the Carolingian Era: Theology and Art of Christ’s Passion (2001), The Codex Amiatinus and its “Sister" Bibles: Scripture, Liturgy, and Art in the Milieu of the Venerable Bede (2019), and has co-edited several volumes on late antique and early medieval culture, religion, and art. She is a Fellow of the Medieval Academy of America.

There will be a book signing following the lecture.