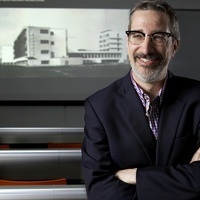 "Nazi-Occupied Krakow: Digital and Analog Approaches to the Holocaust"

Plans for rebuilding Krakow during its WWII Nazi occupation were ambitious and followed Adolf Hitler’s goal to rebuild cities such as Nuremberg and Berlin. Also ambitious were the regime’s Holocaust goals of concentrating and ultimately murdering the Jewish population of
Krakow. Comparing Nazi plans, drawings, and photographs to digital renderings of the Jewish ghetto, Professor Jaskot shows how spatial visualizations help us to see how the ambitions for establishing Nazi presence complemented but also contradicted spatial planning for the threatened Jewish community.

PAUL JASKOT is professor of art history and director of the Wired Lab for Digital Art History and Visual Culture at Duke University. He has published widely on the political history of Nazi cultural policy and its influence in the postwar era. In addition to this work, he has been a member of the Holocaust Geography Collaborative since 2007, a collaborative dedicated to the use of GIS and other methods to analyze the spaces of the genocide.