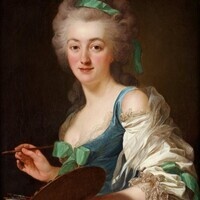 In her presentation, Professor Melissa Hyde explores questions of place in relation to women who worked as professional artists in 18th-century Paris. How did women like Elisabeth Louise Vigée Le Brun go about making a place for themselves as artists in a world that was structured culturally, scientifically, legally, and politically to exclude them? How did neighborhoods and workspaces bear on their careers, on the art they produced, and on definitions and depictions of the self?

Melissa Hyde is professor of art history and Distinguished Teaching Scholar at the University of Florida. Her research and publications focus on gender and visual culture in 18th- and 19th-century France. She has been a fellow at the Clark Art Institute and at the Institut national d’histoire de l’art in Paris. Her publications include numerous articles, six edited volumes (most recently Rococo Echo: (Art, Theory, and Historiography from Cochin to Coppola), as well as catalogue essays for museums, including the National Gallery in DC, the National Museum in Stockholm, and the Cooper Hewitt Museum of Design in New York. She is past president of both the Historians of Eighteenth-Century Art and Architecture and the American Society for Eighteenth-Century Studies.