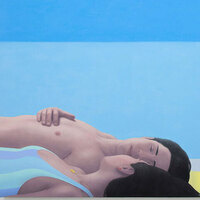 The University of Tennessee School of Art will host artist Ridley Howard as part of our visiting lecture series this September.

Ridley Howard’s oil paintings depict figures in private moments against backdrops of geometric abstraction, simplified architecture, and landscapes. Interceded upon by bold graphics, Howard’s intimate scenes lose the specificity of context, becoming atemporal vignettes starring familiar but unplaceable characters. His tightly cropped compositions often leave out details that would direct the viewer’s sense of narrative, heightening the formal qualities of the bodies and clothes against the flat planes that surround them. These tableaus take on the indistinct quality of memories in an era of stock imagery and cinema, rendering even the throes of passion with a camera’s cool neutrality. That the works take two dramatically different scales – monumental works appear side-by-side with canvases only a few inches in area – further complicates the artist’s depiction of intimacy, evoking the silver screen as well as the lens. Nevertheless, the viewer can find the sensuality of Howard’s erotic imagery reflected in the delicate craftsmanship of his compositions, characterized by soft brushstrokes and carefully balanced color relationships. There is palpable tenderness in the soft light of Howard’s figures and zeal in the exuberant colors of his abstracted spaces.

Gesturing in equal parts to minimalist compositions, movie poster design, snapshot photography, impressionistic landscapes, and pop art, Howard’s works harken back to artistic forebears while combining their anachronistic styles with a distinctly contemporary effortlessness. The slight banality of Howard’s scenes is another marker of the artist’s present-day sensibility – even sexually explicit scenes are conveyed with unblinking straightforwardness, in marked contrast to the censorious era his figures evoke. The palatable seduction of Howard’s style gradually gives way to images that exist in unclassifiable space and time, uniting the dreamlike quality of memory with the disorienting poetics of abstraction.

Ridley Howard (b. 1973, Atlanta, GA) earned his MFA from the School of the Museum of Fine Arts Boston in 1999 and his BFA in Painting from the University of Georgia in 1996. He attended the Skowhegan School of Painting and Sculpture in 2000. His work has been exhibited at numerous institutions including the Museum of Fine Arts Boston; The Atlanta Contemporary; the National Academy Museum, New York; the High Museum of Art, Atlanta, GA; and the Knoxville Museum of Art, Knoxville, TN. Howard currently lives and works in Athens, GA.