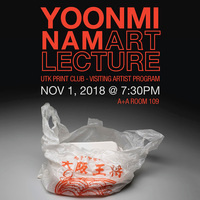 Yoonmi Nam was born and raised in Seoul, South Korea, spending part of her youth in Canada. She received a BFA degree in Printmaking from Hongik University in Seoul, Korea. She moved to the U.S. to study at the Rhode Island School of Design, where she received a MFA degree in painting/printmaking in 2000. Her work considers cross-cultural experience and sense of transience through observations of everyday objects and occurrences. Yoonmi has received grants and awards to support her creative research and travel. Some notable ones include a Solo Exhibition Award from The Print Center in Philadelphia, MI-LAB Artist Residency Award in Japan, the Hall Center Creative Work Fellowship at The University of Kansas, and the Ngwang Choephel Fellowship from the U.S. State Department. Her work has been shown both nationally and internationally including countries such as Japan, New Zealand, Scotland, Korea, Germany, Poland, Mexico, Bulgaria, Italy, Sweden, and Paraguay. Yoonmi has taught at RISD and Washington University in St. Louis. Currently, she teaches at the University of Kansas, where she has been a faculty member since 2001.

Yoonmi Nam’s visit is sponsored by the UT Print Club.