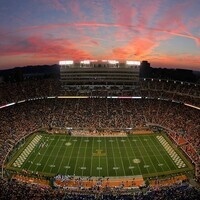 One of college football's most iconic landmarks, Neyland Stadium is the fifth-largest stadium in the nation.

The present day Neyland Stadium, Shields-Watkins Field, had its beginning in 1919. Col. W.S. Shields, president of Knoxville's City National Bank and a UT trustee, provided the initial capital to prepare and equip an athletic field. Thus, when the field was completed in March 1921, it was called Shields-Watkins Field in honor of the donor and his wife, Alice Watkins-Shields.

The stadium, apart from the field it grew to enclose, came to bear its own distinguished name -- Neyland Stadium. It was named for the man most responsible for the growth and development of Tennessee's proud football tradition. General Robert R. Neyland served as head coach from 1926-1952, with two interruptions for military service.

It was historic, moving, and most importantly efficient. I loved it.

The game was fantastic until we lost to the team that was a ‘surefire win’ our passing and running game are in serious trouble.

I love the Rally, people get to know more about the teams of UTK. That's really cool.